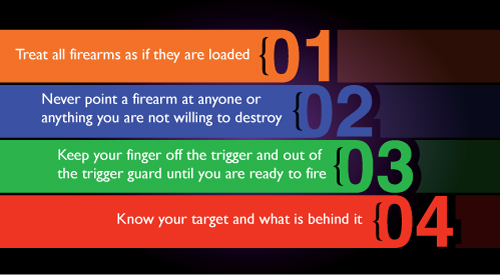 They may sound easy but they are not. Like everything else they take practice.

1) Treat all firearms as if they were loaded. Remember the old saying "A hot pan looks just like a cold pan" . Well a loaded gun looks just like an unloaded gun. The point is that regardless of the fact that you have unloaded the gun and double checked that it is unloaded and then checked again you should still treat the gun as if it is loaded. This is part of the practice that builds muscle memory (and avoids stupid mistakes). If you consistently treat any and every gun as if it were loaded and continue to practice rules 2 and 3 then, when the time comes and things are happening and you are not thinking clearly, muscle memory will kick in and you will automatically, by habit, handle the gun safely. You can start by treating a SIRT laser training pistol, your own gun with a laser cartridge, or even the AimTrak gun controller as if it were a real loaded gun. This is a very real part of the practice to build muscle memory that starts before the practice video begins and continues after the video ends.

https://www.youtube.com/watch?v=zw-jTCNZSmY As the cop in this video says "See this is an unloaded gun." Then how did he happen to shoot himself in front of a classroom full of children?

And, of course, you NEVER want to check if a gun is loaded like this guy did.
http://gawker.com/man-fatally-shoots-himself-in-head-during-gun-safety-le-1530544030

OK now here is were more than one person is at fault. https://www.youtube.com/watch?v=KUonA66btgI
This cop is checking out a gun in a gun store. He would expect that a gun coming from behind the counter is unloaded. So fault #1 is the gun store that had a loaded gun behind the counter. Fault #2 is that the cop is not treating the gun as if it were loaded. He is also violating the next rule by pointing directly at the clerk at one point and then pointing it at the guy standing next to him at the counter and pulling the trigger while his own hand is over the muzzle. Thank God he moved the gun slightly before pulling the trigger or the guy next to him may have ended up dead. As it is he shot himself through the hand. When the store clerk handed him the gun the cop should have 1) verified for himself that the gun was unloaded. Just because someone tells you a gun is unloaded you must still get in the habit of checking for yourself. 2) even after verification he should have still kept the gun pointed in a safe direction; not at the guy standing next to him, not at the clerk, and not with his hand over the muzzle. Especially if you are going to pull the trigger.

2) Keep the gun pointed in a safe direction until you are ready to shoot. You are saying to yourself "Well Duhhh!". Believe me this is not as simple as it sounds. It takes above normal awareness.

https://www.google.com/#q=pistol+muzzle+sweep+youtube What you see in this YouTube video is more typical than you may think. I've seen shooters at the range bring a jammed gun to their chest to examine it with the gun then pointing at the person standing next to them. Or as they pull the gun out of the range bag on the floor they sweep the guy next to them when they go to place it on the range table. It happens all the time. Again, it takes practice to acquire the muscle memory so that it becomes a mental habit. As I mentioned in rule #1 you can start by treating a laser training pistol or even the AimTrak gun controller as if it were a real gun and keep it pointed in a safe direction until you are ready to begin the practice video. In the case of the AimTrak lightgun game controller, you may think that it is silly to be treating a plastic toy gun as if it were real but this is what practice is all about. This is what builds and enforces good habits. See above where the cop at the gun store is handed a loaded gun without knowing it. You should never point a gun, even unloaded, at anything you do not intend to shoot. Period.

3) Keep your finger off of the trigger until ready to shoot. Again, sounds easy but by our nature we were born to grip with our whole hand. It is not natural to grip with only three fingers and the thumb. To grab a gun with the trigger finger indexed along the barrel and not within the trigger guard takes practice and above normal awareness. Watch the YouTube video in lesson #1 again. Was the cop's finger off of the trigger? What do you think? What about this guy? https://www.youtube.com/watch?v=p3kJ6SU3ycs (Warning: Bad Language. The guy just shot himself so it is understandable.) Was his finger off of the trigger until ready to shoot? The point is both of these guys were "experienced" shooters and yet they made a mistake. Mistakes happen. They happen less often to those who practice.

4) Know what is behind and beyond your target. Now this topic can go from the obvious to the not so obvious. The Obvious, of course, might be a police shootout on a crowded street. It's obvious that there are innocent people behind the bad guy in the line of fire but every year innocent bystanders are hit by police fire. When your body gets pumped full of adrenaline you get tunnel vision and hyper-anxious and are not able to think of all of the details in a complicated scenario. Hopefully, a few of the scenarios in the iFightBack library will help you train your mind to be as aware as possible if you were to ever find yourself in this type of situation. If you were defending yourself in a carjacking, for instance, you would be legally responsible for any bystanders hit by your shots. Not to mention the moral and mental implications.

The No-So-Obvious is that bullets will penetrate walls and floors. Is the bad guy standing in front of the wall of your children's bedroom? Maybe there is a hall behind the wall and then the children's bedroom. Maybe there is a wall, a hall, another wall, a bathroom, another wall, and then the children's bedroom. This video will show that a 9mm hollow point can penetrate five walls and still have the power to kill someone.
https://www.youtube.com/watch?v=X0qgQoej5zE
So, when we say "know what is behind your target", sometimes it is not so obvious. An outside brick wall may stop a bullet but an exterior wall with wood siding would not. What is in your neighbor's house on the other side of that wall?
https://www.youtube.com/watch?v=tQ1kREDfHpE In this video the interior/exterior wall penetration demo starts at 6:00 minutes in. Refrigerator penetration starts at 11:20 in.

Talking about bullet penetration you need to know the difference between cover and concealment for yourself as well as the bad guy. There are some iFightBack practice videos where the bad guy is behind an interior wall or piece of furniture. You know you can still shoot, right?

Also, don't forget that bullets can go through bad guys as well so you can still hit an innocent bystander even though you hit your intended target.